Who is Mother Mary Loyola? 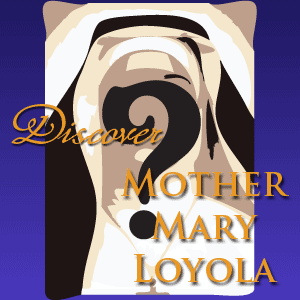 Mother Mary Loyola was a household name among Catholics of her time.

Her writing earned her the love and praise of generations, as evidenced by the comments found in contemporary Catholic journals:

"Catholic literature, doctrinal and devotional, owes a great deal to Mother Mary Loyola. There is a certain wholesomeness, naturalness, geniality about her spirituality that at once wins a place in the Catholic heart for whatever she writes."

"The writings of Mother Mary Loyola have carried the Bar Convent beyond all barriers.  She has been beyond doubt the greatest benefactress of the pen known to the present growing generation of Catholics in these islands, and her readers are counted by tens of thousands overseas."

Mother Loyola's work has gained a new following in recent years due to the reintroduction of her allegorical tale, The King of the Golden City. Yet, among those who have come to love this tale, few realize that Mother Mary Loyola wrote over two dozen full length works, each equally appealing.  Her uniquely engaging style has the power to draw its readers in, regardless of age, and bring a deeper, more heartfelt understanding of our Faith as well as a personal relationship with God.  Those who read her books today say her work has truly changed their lives for the better.

"I feel as if she were talking directly to me."

Many of Mother Mary Loyola's books, especially her catechetical works, she termed "talks," and her readers will agree this is an apt description.  One might almost believe that her books were transcripts of her actual talks with children, or of her conversations with God.  Nothing is stilted or overly formal, yet even in their familiarity they do not lack a holy fear of God.  And thus we realize through her writing that meditation in the presence of God is not so difficult as it may sometimes seem.

"The author of The Child of God is a born teacher who probably has discovered and improved her talent by experience and practice, quite independently of any psychological training."  (The Month, May 1899)

Though the everyday things that populated her world differ from ours, Mother Mary Loyola's writing nevertheless remains fresh even today.  This is, no doubt, because she was a gifted storyteller, able to conjure up the most vivid images, so that whether she is describing London in 1910 or Jersusalem in ancient times, we are apt to feel as though we were there, watching the scene by her side.

It is interesting to note, then, that Mother Loyola--born Elizabeth Giles in 1845--was the grand-niece of Michael Faraday, the famous physicist.  Despite being one of the most important and influential scientists in modern history, Faraday was perhaps best-loved for his annual Christmas lectures, in which he would explain some of his cutting-edge discoveries to a rapt audience of children, in language they could understand.  Mother Loyola seems to have shared her great uncle's gift for explaining difficult things to children in a way that kept them enraptured.  Despite its millenia, in her hands, the Catholic Faith is never tired or tedious, never confusing, yet neither is it trivialized or saccharine--in fact, you may have a hard time putting her books down!

Because Mother Loyola was a nun, she had few possessions, and upon her death, these were disposed of, as was common in such situations.  Though photographs of many of the inmates of the Bar Convent still exist, no one alive today can put names to these images.

Therefore, much of what we know is from genealogical research into her family, and bits of information gleaned from her books as well as articles in contemporary journals such as the Tablet.

To read what we know so far, check out our biography page.

You can also learn more about the books she wrote by reading our blog post: How to Read Mother Mary Loyola.

We have spent countless hours researching on the internet, establishing contacts overseas, and piecing together the bits of information we have found.  In April 2015, we were able to travel to the UK to conduct research at the Jesuit Archives and to visit with living relatives of Mother Loyola.  There is more to be found, but continued research requires further travel to England and potentially Rome.  In addition, we hope to visit the Bar Convent and compare the photographs there with images we have of some of Mother Loyola's relatives.

We need your help to realize this dream of filling in the blanks and bringing Mother Loyola's life story to the world.  Who knows, this groundwork could even form the basis for a cause for sainthood...

...but none of that can happen without your generous donations.  Please consider giving whatever you can, even if it is only a few dollars.  You can help bring Mother Loyola's story to life!