Yes, you read that headline correctly: this time we're not asking "Who is Mother Mary Loyola?" 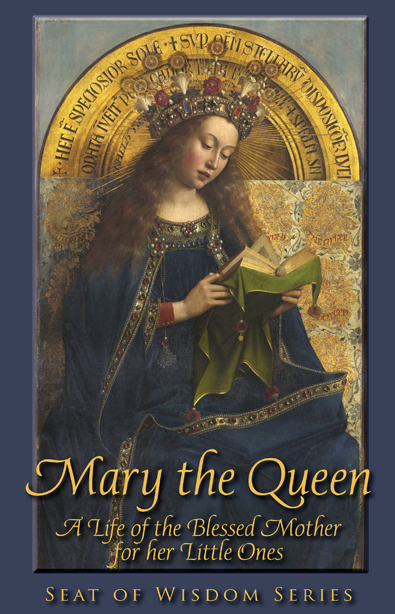 Mother Mary St. Peter is the author of our newest book, Mary the Queen, which is just the first in a series of 8 books to come, named "The Seat of Wisdom Series," in honor of Our Lady.

But I'm getting ahead of myself...let's begin at the beginning!

I first discovered the work of Mother Mary St. Peter over 6 years ago, when I happened to find the book "The Laws of the King" at a local estate sale.  Right away this book by Benziger Brothers reminded me of my favorite author (you-know-who...) and I brought it home with high hopes.  At that time, I knew the author only as she was listed on the title page: "A Religious of the Society of the Holy Child Jesus."

When I got home and read the book a little more closely, I have to admit I was a little disappointed.  This author's writing had a lot of the characteristics of Mother Loyola's, but it wasn't quite the same.  I had to recognize how far ahead of her time Mother Loyola really was; this author, writing in 1905, sounded much more antiquated.  She seemed to be trying to imitate the chattiness of Mother Loyola's books, but it didn't match her writing style, so the two seemed incongruous and in places condescending. 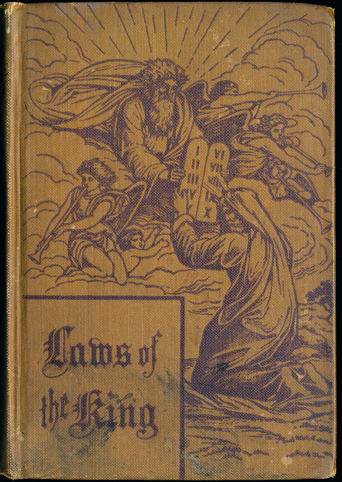 Saddened, I put the book on my shelf.  Time passed.  Every once in a while, I would remember it, take it off the shelf, and look at it again.  But each time, I would sigh and put it back on the shelf.  It was a great book, but it would never stand up to the demands of modern readers.  It would be too frustrating for young children to read.

But I was curious about the anonymous author.  On a whim, I decided to see if I could find out more about him or her.  And this search, like the search for Mother Loyola's work, led me to a number of similar works written by the same author.  I was thrilled to be able to obtain them through Interlibrary Loan...and even more thrilled to find that not all of them were as difficult to read or as uncomfortably chatty as "The Laws of the King."  And above all, the topics that she covered were the sort of topics that have been largely forgotten in our day and age.

For example: every Christian knows Mary was the mother of Our Lord, and we know what the Gospels tell us about her.  Most Catholics have at least heard of the Assumption, even if they don't quite understand it, but not many know that Mary actually died and was buried before she was assumed into heaven...a natural "assumption,"(oh what a pun!) given the way this event is depicted in artwork.  There is much to be learned about her life that was never recorded in the Scriptures, but very little, if any, of this is taught nowadays.  Yet the first of these books, "Mary the Queen," introduces children to many of these traditional stories. 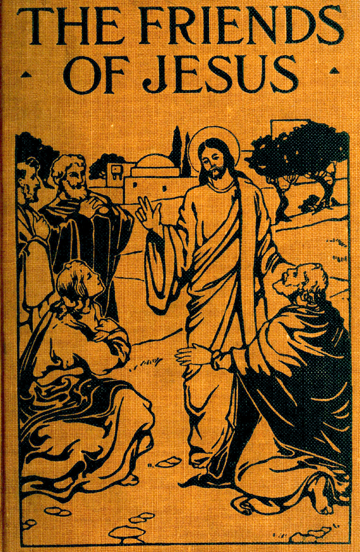 Next, I had a look at the book "The Story of the Friends of Jesus."  It would be natural to assume that this book talks about Jesus' disciples, right?  And that it does...including the traditional stories of what happened to each of the apostles after Jesus' death.  But that's not all...it introduces the nine choirs of angels, tells about the Patriarchs and Prophets who foretold or foreshadowed the coming of the Messiah; it tells of Jesus' other friends, such as Mary, Martha and Lazarus; even Zaccheus and Joseph of Arimathea.

I noticed a pattern here: many of the things these books were teaching were based not merely in scripture, or in the Catechism, but were stories that belonged to the Traditions of the Church, and were handed down to us from the Apostles themselves and their direct successors.  This is what makes the Catholic Church uniquely whole, and is in fact part of what we mean when we say that our Church is One, Holy, Catholic and Apostolic.  We have the Family Tree, so to speak...and by knowing the stories of our ancestors, we more fully understand the richness and concrete reality of our Faith.

Now when I looked at "The Laws of the King" sitting on my shelf, I saw it with a different pair of eyes.  So the language was awkward and outdated.  That did not take away from the very solid teaching about the Ten Commandments that lay inside.  And I knew it was time to make an exception to my rule of reprinting books as they were written, without making changes.  These books would need some fine-tuning to pass muster with our readers.  But the final product would be worth it!

Ah!  But being a terribly curious person, I always like to know at least a little bit about an author, and if I'm curious, I'm sure my readers will be too.  So I couldn't stop there.  I had to see what I could discover about this anonymous author. 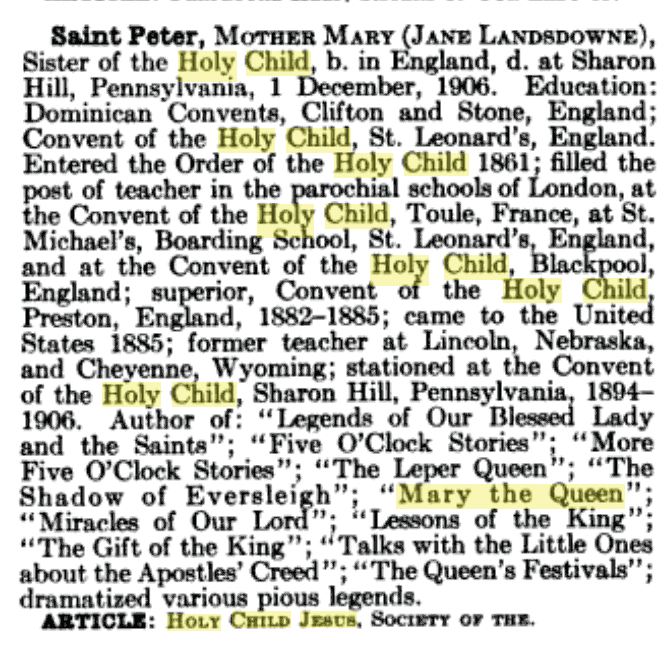 Fortunately, this author had written an article in the Catholic Encyclopedia about her order, the Society of the Holy Child Jesus, and she was therefore included in the biographical listing of contributing authors.  Now I had a name: Mother Mary St. Peter, nee Jane Lansdowne (it is misspelled in this article), and some basic information about her.  Emboldened, I contacted the American Province of the Society of the Holy Child Jesus, asking if there were any further information to be had...but after my experiences in studying the life of Mother Mary Loyola, my expectations were very low.

I was terribly pleased, then, to find that not only did the archivist there have material to share, but they were quite pleased to help me in my quest to make Mother Mary St. Peter and her writing more well known.

So a rainy day in October 2015 found me in Philadelphia, where I visited the SHCJ Archives and was able to find some excellent information about our author, including having a look at several other books she had written which were unavailable through Interlibrary Loan.  What an interesting life Mother St. Peter must have led!

Born in England (we are not sure where, though it is likely somewhere in Staffordshire), Jane Lansdowne entered the Society of the Holy Child Jesus while it was still in its infancy, having been founded by Cornelia Connelly in 1840 (though their first house was not opened until 1846).  But her life as a religious was far different from that of Mother Mary Loyola; though she too taught in the convent schools, she was sent to America in 1885, around the time and place that Laura Ingalls Wilder was just beginning to teach too.  She would spend the rest of her life teaching in Nebraska, Minnesota and Wyoming, before retiring to the motherhouse of the order in 1897.  It was then that she took up writing, as a way of helping to raise money for the building of the convent's chapel.

But there was one bit of information I was burning to know:  Mother Mary St. Peter had sketched out her series on Christian Doctrine, and had finished all but one when she died in 1906.  Several of these were published after her death, in 1907.  But "The Laws of the King," which had sat on my shelf for so many years, was not published until 1910.  Had she really written it, or was it written by another sister?  The style was similar...and yet not.  Of all the books, this one was by far the most awkward in its tone.

Here I was thankful to find among the archive documents a 50-page biography of Mother Mary St. Peter, written by a fellow religious.  It contained many interesting anecdotes about her life, but for me the most significant was the following:

"Mother St. Peter was halfway through "The Laws of the King" when the Angel of Death came for her, and the little book was completed by Mother M. Frances O'Hare."

As we complete more of her books, we will share some more stories about Mother St. Peter.  For now, we are thrilled to introduce her to a new readership, and to finally share her hard work with an appreciative audience.