Many of you have been asking about our new Magnificat Readers, so we thought we'd give you a little background about how they came to be.

As many of you know, we have recently dedicated much of our time and attention to reprinting the series of Catholic Religion textbooks from the 1930s called the Highway to Heaven Series.


I'm going to just be honest and say that we first fell in love with the Highway to Heaven books because, well, I'm a visual arts person, OK?  I took one look at the beautiful illustrations in the series and was smitten. 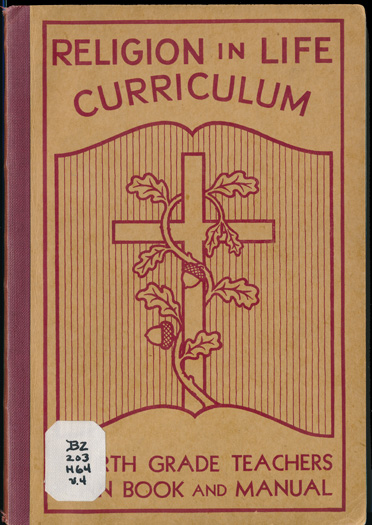 But as we worked more towards reprinting the teacher's manuals to go with the textbooks, we realized what a veritable goldmine of traditional teaching there was included in these humble little books.  (In fact, I think there is potential for using the recommended teacher's readings as a religion course for high school and up!)

What we thought were simply teacher's manuals really were, as the title says, a full religion curriculum.  Hundreds of books were referred to by these curriculum manuals, and we were determined to see what these resources were like.  After all, we really liked what this series had to offer (and by now, it wasn't just for the pretty pictures!) so we thought it was worth exploring.

As we undertook our worldwide search for these mostly out-of-print books, and they began arriving in the mail, it was like Christmas every time the postman came.  I never knew from one day to the next what amazing book was going to come out of these parcels.  Many of them you have seen by now: there's the Wonder Series, Practical Aids for Catholic Teachers, The Bible Story...and there's lots more to come!  On the right you can see a photo of just a few of the shelves we have holding all the books that go with this series. 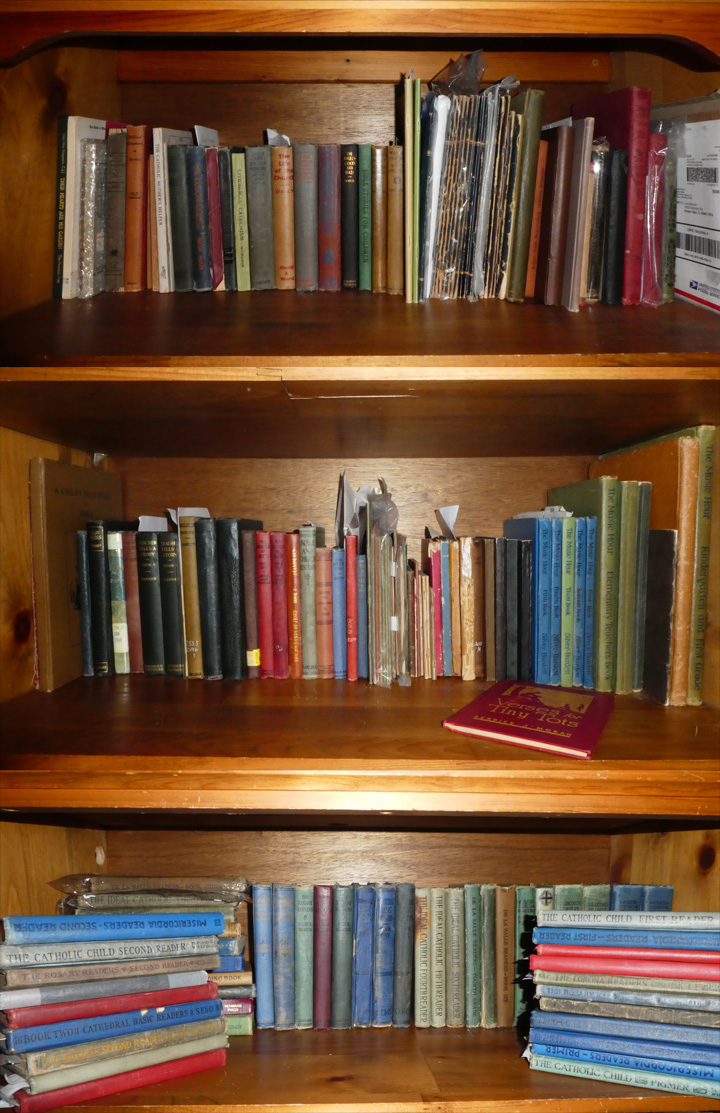 But one thing was going to be tricky...there were lots of references to old Catholic school readers, like the Cathedral Basic Readers (the old ones with the blue covers, before they redid them in the 1950s), the Ideal Catholic Readers, the American Cardinal Readers, etc.  At first we thought that as long as one of these series was still in print, that would be sufficient.  As TAN carries the American Cardinal Readers, we thought that was taken care of.

But the more we researched and looked at the vast number of suggested readings, the more we found that this was not going to cut it.  There were simply too many readings that would be missed if we relied only on the American Cardinal Readers.  So once more we began searching, this time for these other readers, to see what could be done.

And once again we were stunned by the beauty of these treasured Catholic school readers.  So much love and care were put into building these, and yet most of them cannot be found anymore...most probably because they were all loved to pieces.  (Many of those we have been able to track down have been in much loved--that is, terrible--condition!)

We realized that the answer here was to make a master list of all the required readings, artwork, music, etc.--then to find as many of these as we possibly could, and to build our own readers using all these pieces, so that to the greatest extent possible, all of the recommended student reading for each grade could be found under one cover. 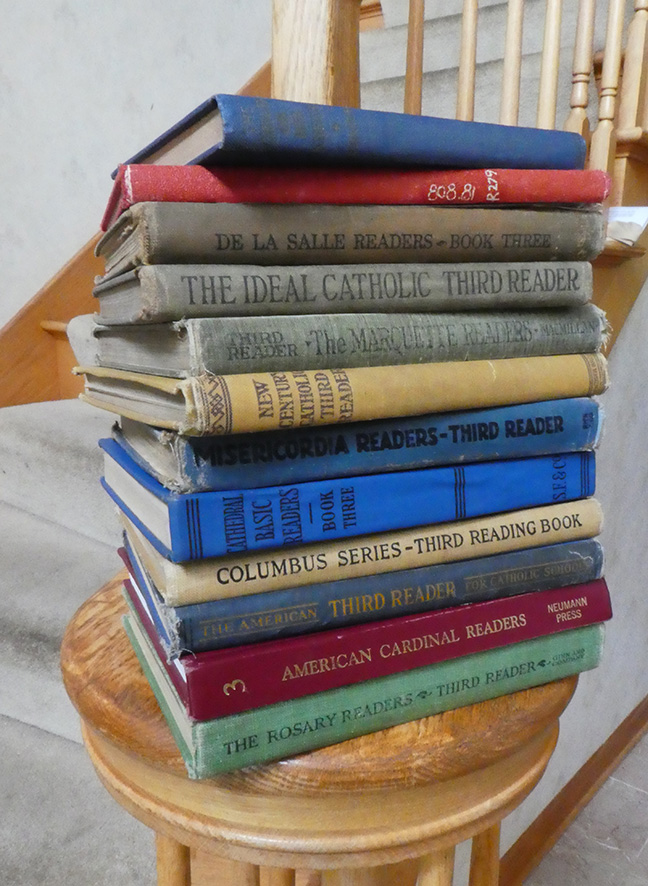 To show you what is going into these readers, here on the left is a photo of just the books we have on hand that went into assembling the third grade reader.  This doesn't include the books that we borrowed from generous readers, or that we could only find in digital format (thank you Internet Archive!), or that we traveled to Washington, D.C. to photograph! 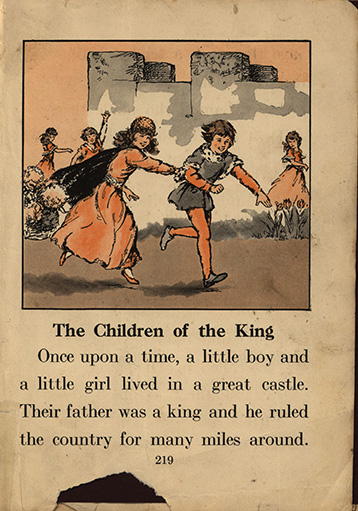 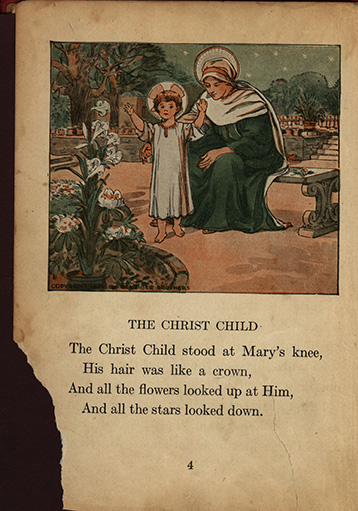 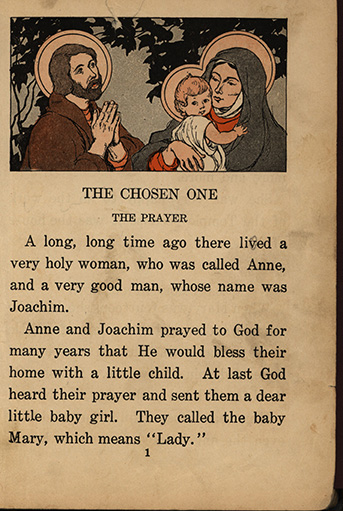 Haha, you thought I was kidding about these being loved to pieces, didn't you?

Somehow we have managed to scan in all these dozens upon dozens of readers, and we have now assembled all the little bits together in the order they are presented in the curriculum for grades 1-5.  Starting this summer, then, we began the task of typesetting all of these stories into a series of books, and reuniting each one with its charming illustrations, as well as adding a handful of hymns and suggested artwork.

We have finally finished the Second Grade reader, so you can see sample pages of the final product here: the Magnificat Second Grade Reader.  We are currently working hard on the First and Third Grades, in the hopes of finishing them in the next month or two, and then we hope to get to Fourth and Fifth grades in early 2019.

We do have a wish list of books that we are still searching for, so do let us know if you happen to own or come across copies of any of the following:

URGENTLY NEEDED: The American Cardinal Readers, Books 3 and 4--in the original 1929 Benziger version only (not the Neumann reprints)

A Child's Way of the Cross by Mary Dixon Thayer

The Catholic Education Series Readers by Shields and Pace—grades 4, 6

The Catholic Youth Reader by McEvoy and Weider (Winston)—grade 5

Corona Readers (NOT the New Corona Readers) by Fasset and Egan/Sisters Servants of the Immaculate Heart of Mary (Athenaeum Press)—grades 2, 3