Our mission at St. Augustine Academy Press is to bring you classic books you can trust.  98 Percent of the time that means that they are Catholic books with an imprimatur.  But every once in a while we make a slight exception, and we always try to make sure that this is for a good reason.

For example, The Goops is obviously not Catholic, but it is very funny and is a wonderfully creative way to encourage good behavior in children.  In a similar strain, Yourself and Your House Wonderful was written by a Protestant and is full of whimsical dwarves representing the parts of the digestive system.  Why would we descend to such nonsense?  Because it is an ideal antidote to the science-obsessed, self-obsessed, Godless way in which our culture views that which God created in His own image: the human body.

Some have criticized me for publishing the Child's Book of Warriors and Child's Book of Saints because their author, William Canton, left the Catholic Church after his beloved daughter Winifred Vera (the W.V. for whom he wrote those books) died suddenly at age 11.  Naturally his apostasy is tragic, but it doesn't affect the stories he wrote, and anyone who has read these books will not wonder why I made this choice.  They are magnificent works of literary art.

Of course, none of these books touch any doctrine or practices of the Church.  In this area, I am careful to avoid anything without an Imprimatur or other Ecclesiastical approval.  The first exception I made on this point was in our recent republishing of Enid Chadwick's My Book of the Church's Year, which is Anglo-Catholic.  Alert Roman Catholics will notice in this book that the Conception of the Virgin Mary leaves out the word "Immaculate," and may be confused by the reference to Charles the White King.  But the rest of the book is so uniformly charming and edifying that these points are worth taking the time to explain.

So when Dr. Kwasniewski, who graciously supplied the foreword for our reprint of Chadwick's book, passed along a recommendation from a friend that we should look at another Anglo-Catholic treasure, Heavenward Bound, we took his suggestion seriously and ordered a copy.

This book confused me thoroughly.  Why?  Because I read it from cover to cover and I couldn't find anything in it that was contrary to the Doctrine of the Church...except for the omission of any mention of the Pope.  Oh, and at the end, in describing the reception of Communion, it mentions receiving the Precious Blood from the Chalice and the possibility of receiving Communion in the hand...but these practices are in fact found in many Catholic churches nowadays, so such mention is not as shocking as it might have been to Roman Catholics 50 years ago.

I had to read up on Anglo-Catholicism to try and understand how it could be possible to write such a beautifully Catholic book and yet technically be High Church Anglican.  This is the tightrope balance walked by the heirs of the Oxford Movement.  And in these days when Ultramontanism is threatening the very survival of our Church, the omission of mention of the Pope is...well...perhaps less troublesome than it otherwise might be...

Tongue in cheek aside, of course Roman Catholic readers will want to supply this deficiency with their children if they use this book.  It will not be difficult, as the imagery is quite evocative of the idea...as you can see in this illustration: 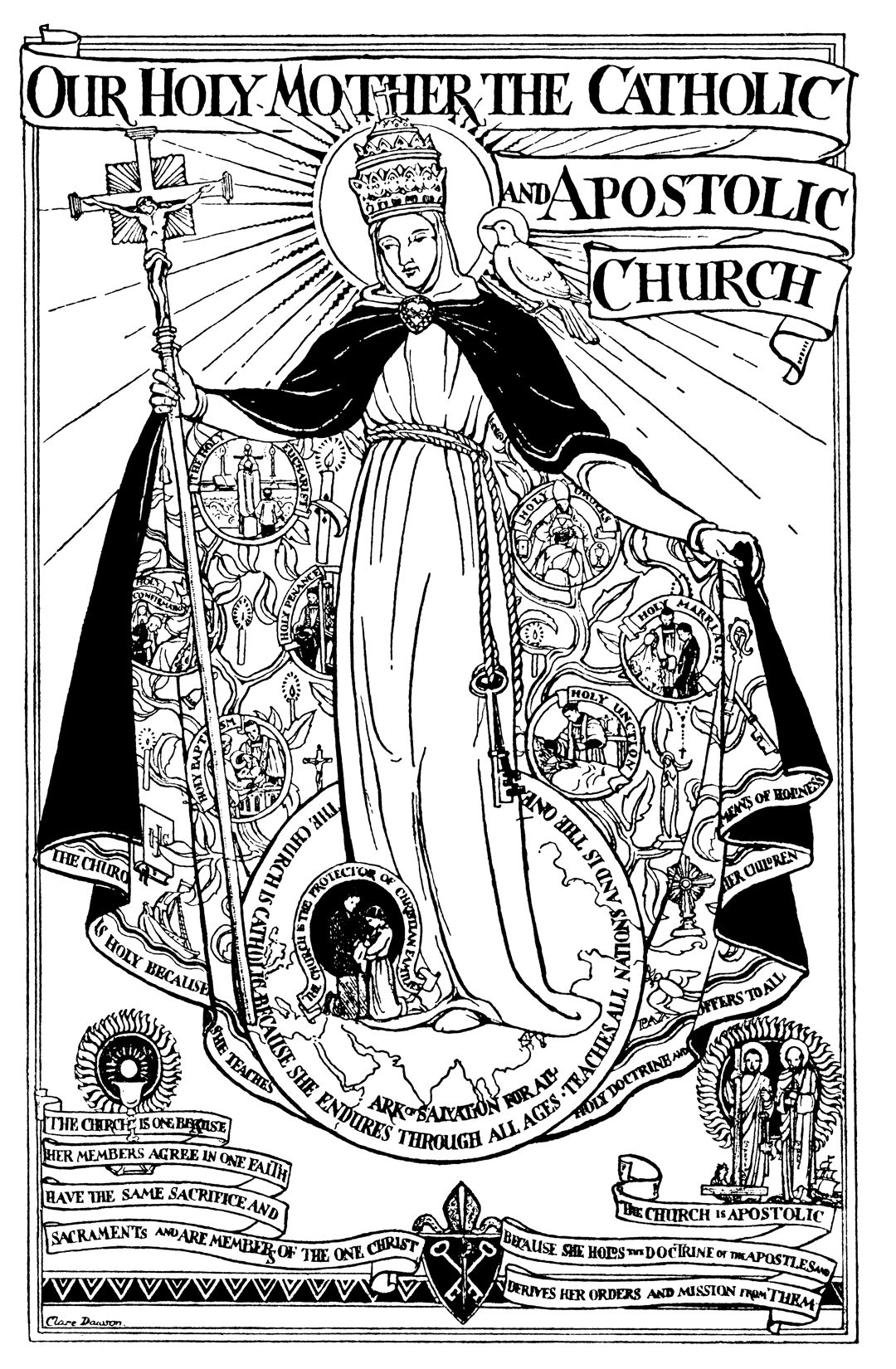 Looking at this illustration, surely you will see why I was confused...the keys, the Papal tiara, the seven sacraments and the four Marks of the Church...but...it's not Roman Catholic???

And yes, as always, part of the reason I quickly fell in love with this book is its illustrations.  Looking at the depth of information in the one above, can you blame me?  I believe the best way to teach sound doctrine is to combine it with beauty.  They suit one another perfectly.

Therefore I made the choice to republish this lovely book and I do highly recommend it.  Its language is distinctly British but in such a charming way, and I wouldn't be surprised if the author had read some of Mother Loyola.  His voice is very like hers in places.

So for the first time, I have republished a doctrinal book that does not have an imprimatur.  I don't plan to do it again.  But I had a very good reason, and when you read this book, I suspect you will agree with me.