Because we at St. Augustine Academy Press have done our best to champion the work of Mother Mary Loyola, it is only natural that we often are asked if we carry her best-known work: The King of the Golden City.  And it is equally natural when people are confused by the reply: "No, that's the one book we don't carry..."

Our reason for this has always been twofold: first, we try to focus on books that are not currently in print, rather than duplicating the work of others.  Second, we felt that the current editions on the market--CHC's beautiful full-color edition and Janet MacKenzie's Study Edition--were so well done, we neither wished to step on their toes nor compete with them. 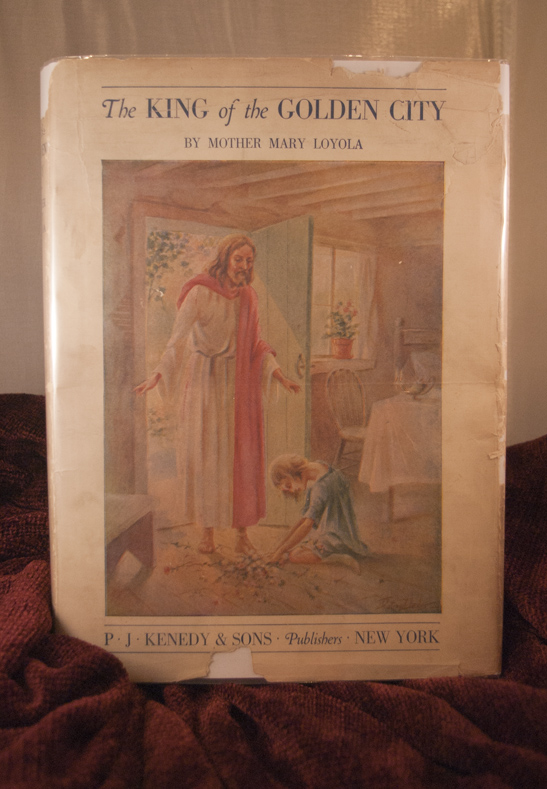 But the one thing we always had a fond wish to do was to publish a near replica of the original 1921 edition--a hardcover with dust jacket and the original illustrations.  Those who have had the privilege of seeing the original edition will easily understand why: each page had a green scrolled frame with Eucharistic imagery which added a level of antique beauty not often seen in today's books.

Well, the good news is that this wish of ours is about to come true!  Since last November, we've been working diligently to create a Centennial Edition of The King of the Golden City--one that will recreate as closely as possible the look and feel of the original.

We began by restoring the original illustrations, which were printed using a process that reproduced the original watercolors by J.Watson Davis as tiny dots, as if they were an Impressionist painting.  This process is called screening.  Each of four colors is laid down separately as dots, but the process was often imperfect: sometimes the paper would shift just slightly between colors, causing a blurred look.  Or bits of ink might begin to build up on the printing plates, causing smudges, blobs and other artifacts.  Using scans from several different copies of the original book, we carefully retouched each individual image so that the placement of the dots was not impacted by the corrections.  We then blurred the images just slightly to avoid the possibility that in the final printing process, the rescreening might introduce wavy patterns called moiré.  The final product is hardly distinguishable from the original, but omits the errors and artifacts of some of the original copies. 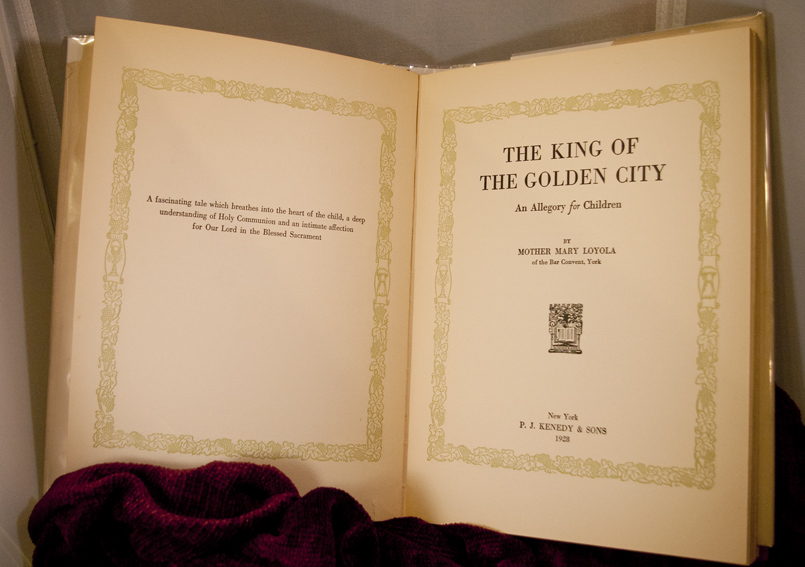 Next we focused on the frames that were printed on each page.  There were four different designs for the frames, used in rotation throughout the book.  Again, using multiple scans, we rebuilt each frame, cleaning up places where the ink was uneven, while leaving the original feel of the old printing.  (We didn't want it to look perfect and digital--we wanted it to have the same feel, so that you would get the sense that this might have been printed in the 1920s.)  This restoration included the traditional ex libris that was printed inside the front cover.

Once the illustrations were ready, we set out to find a font that preserved the feel and age of the original typeface, while at the same time enhancing readability.  The original appeared to be a version of Bodoni, but the modern versions of Bodoni that we had access to were not a good match and looked awkward (and Adobe's better, more nuanced version was beyond our budget).  So instead we chose Metropolitan Pro, Lanston Type Company's digitization of Bruce Rogers' well-known Centaur typeface, designed in 1914.  It has a very authentic period look and while it does not match the original typeface exactly, it gives a similar feel (and we think it is even more handsome too).  We then carefully tweaked the letter weight and line spacing so that the text flow was as close as possible to the flow of the original, right down to the number of characters per line and lines per page.

The one change we made, however, had to do with the method of inclusion of the color plates.  The original book would have been printed in a 2-color press with movable type: black for the text and green for the frames.  Then the four-color illustrations would have been printed separately and "tipped in" with glue in the appropriate places.  Today's printing technology makes this 2-part process unnecessary, and we deemed it worthwhile to save paper by including the illustrations in the flow of the text, rather than leaving the back side of each one blank like the original plates. 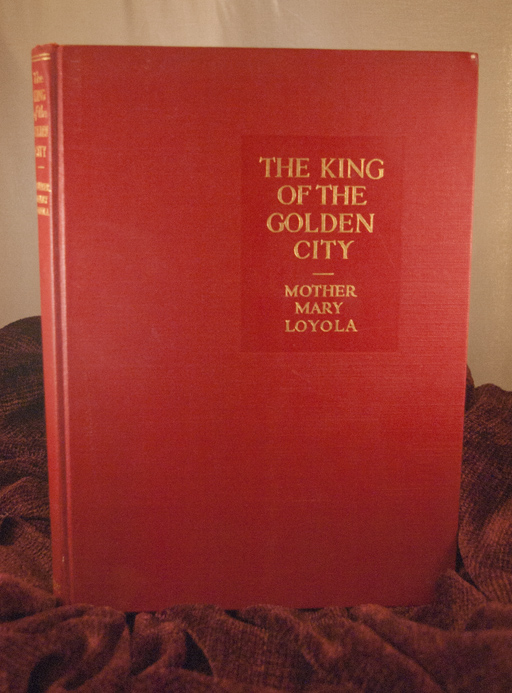 So you can see that it has taken some time to carefully ensure the quality of the final product, down to the thicker paper which we hope will enhance the vintage feel of this special Centennial Edition.  The cover will be red cloth with gold stamping, again, in imitation of the original, and the dust cover is also made to match, but with some extra features included, such as excerpts from reviews found in contemporary journals, and a brief biography of Mother Mary Loyola on the jacket flap.  We have even added a new introduction to this edition, including suggestions from a teacher who has used it for many years on how to read it with your children so that they--and you--can get the most out of it.

We think this Centennial Edition will make a perfect gift and an heirloom that will be passed down to generations to come!

We absolutely can't wait for this book to finally arrive from the printer (hopefully in time for Easter), and in the meantime, we couldn't help wanting to give you a sneak peek so that you can get excited too!  Update 2/27/16: We are now accepting pre-orders and expect the books to arrive in time for Easter!!!  Click here to reserve your copy!