Many years ago, when my children were still very young, we discovered the excellent DVD published by Pro Multis Media of Sing-along Songs for Catholic Children.  Not only did my children love the music on this video, I loved it, and that's saying a lot, because a lot of children's music tends to act like a vegetable grater on my nerves.  I think there may be a ring in hell where Barney's music is played all day and the Teletubbies gug, gumble and giggle.

As my children got older, even though they no longer wished to listen to those songs, the benefits they had gained began to show: they had no trouble whatsoever remembering their Works of Mercy or their Ten Commandments.  (Now if only there were a song for the Mysteries of the Rosary...)  And I'll be honest: I don't tire of them, even though my older children complain (Heh-heh...they complain, but before they know it, they're listening along...).  For the past three years, this DVD has been my youngest son's favorite.  He walks around the house singing the songs.  And this summer, when my 9 year old daughter accompanied me to a Homeschool Conference in Dayton, we sang these songs together (in two part harmony) the whole way!  It's enough to bring tears to the eyes.

So in case you hadn't guessed already, I really love these songs and I give thanks not only to their composer, but to Pro Multis Media and those that went before them, who have kept this music in circulation.

So I shouldn't have been surprised when, last year, I was contacted by a priest from California, Father Mark Mazza, who suggested to me that it would be wonderful to gather up all the sheet music for these songs and reprint it in book form.  He had been using this music to teach catechism for decades and informed me that it had been written by John Redmond, a well known songwriter in the 30's and 40's, who was best known for his authorship of the Bing Crosby tune, "Christmas in Killarney."  I was intrigued by the idea, but a brief search showed me that this would be a project fraught with difficulties that seemed insurmountable.  It was more than I could realistically manage, to track down this sheet music from the 1950's and 60's, from the far corners of the earth.

But every time I would listen to the songs with my son, I would think about the idea.  When I went to my children's school for their annual Grandparents' day show, I thought how wonderful it would be if the kids could sing these songs...I bet their grandparents would love them!  Then I heard that a friend of mine, a very talented choir director and composer in his own right, who homeschools his children and currently has two in college, was looking for a side job.  At that moment it occurred to me that if we couldn't find the original sheet music, we could always recreate it from the recordings...

Having ascertained that my friend was amenable to the idea, I again contacted Father Mazza.  He had not been idle during this time, despite my having turned him down.  He had been in contact with Redmond's niece, as well as the Historical Society in Clinton, Massachusetts, where Redmond grew up.  With their assistance, he had by this time collected not only about 85% of the sheet music; he had also amassed a collection of the original 45's and LP's that contained these songs and others by Redmond that have been lost over the years.

I was stunned.  It became quite clear to me that God wanted this done...and like most of His Projects, this one was going to get much larger than I had planned. 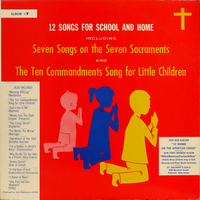 You see, in order to transcribe the sheet music for some of these previously unheard songs, we would need to have them digitized from the original vinyl.  I no longer owned any of the necessary equipment to do so, so I was going to need to bring in another friend who specialized in just that.  And since we had all of the original albums (in multiple copies!  Father Mazza really was dedicated, wouldn't you say???), it seemed to make sense to attempt to remaster some of the songs, especially "I'm a Soldier in Christ's Army," which (for those of you familiar with these songs) has some really bad warping at the end.  My friend Jack confirmed that he felt confident he could fix this.

So we leaped in with both feet.  Deacon Timothy Woods began diligently transcribing the sheet music, adding the beautiful vocal harmonies and some of the elements of the accompaniments from the recordings, as well as guitar notation. Jack Vishneski began transferring the music from vinyl to digital format, cleaning and polishing it.  And meanwhile Father Mazza and I set out to track down the copyright holder in order to obtain the necessary permissions--a task which proved somewhat labyrinthine but thankfully not fruitless, as Redmond actually transferred the rights to the music to the Daughters of St. Paul, who were very gracious and helpful to us in achieving our end.  Father Mazza even courageously offered to obtain an Imprimatur for the music from Archbishop Cordileone, the outcome of which we are now awaiting. 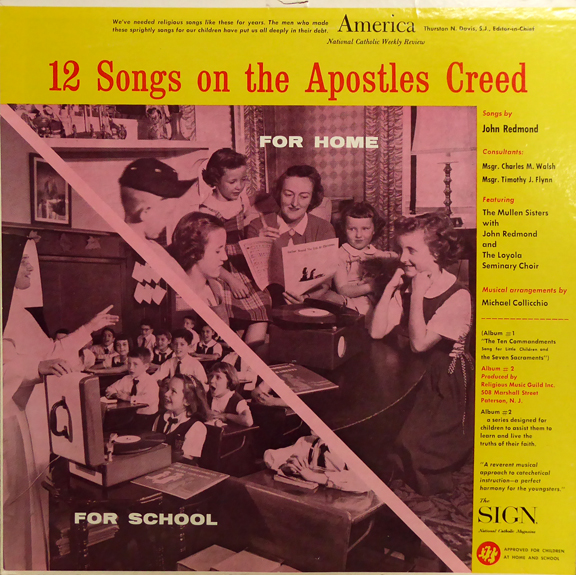 The final end of our long and convoluted story, interrupted throughout with bumps and surprising new developments (as when Father Mazza, at the 11th hour, actually found an earlier recording of "I'm a Soldier in Christ's Army" without the warping) is that in November we will be unveiling this book of sheet music and an accompanying CD (sold separately) of all the music John Redmond wrote for the Religious Music Guild.  (OK, there were a few exceptions...)  Not only will you hear for the first time two new songs: "I Want to be a Little Missionary" and "The Best Christmas Present of All," you will also be able to perform all this music in the home or at school with the aid of the sheet music, which includes several more songs for which recordings were never made professionally (or at all).  We're even creating free downloadable mp3s of the accompaniments so you can sing along even if no one is available to play the piano!

So if you are not familiar with this music yet, we urge you to give it a try.  It truly is an invaluable catechetical tool for little people, and even you will like it.

If you, like us, already love this music and would like to add the adjusted "I'm a Soldier..." and the two new songs to your collection, here's your chance!  Better yet, share a copy (or two!) with a friend this Christmas and spread the joy of hearing your children lisp, "The Holy Ghost is God and the Third Person of the Blessed Trinity...all are One and the Same God, the God above we love!"

Well, this project has taken a great deal longer than expected and I have learned a very great deal in the process.  I've always looked at those huge EQ boards that sound engineers used and shuddered; by now I've gotten to the point where I know just which knob to nudge to get the sound I need!

The beauty of using these new transfers was in getting a sense for what the original recordings sounded like: they are definitely weighted toward the vocals, which gives them a nice retro feel (well, of course...because they are retro!).  Sadly, though we had several copies of each album, we found that certain audio artifacts carried through each of them, leading us to believe that some of the deterioration of sound in the songs (especially in the case of "I'm a Soldier in Christ's Army") was introduced in the very production of these albums.

In listening to other CDs of these songs that have been produced by various companies over the past few decades, we found that many (probably wisely) chose to soften the vocals in order to compensate for this deterioration.  But we couldn't bear to touch the crisp vocals, even though this meant a somewhat less consistent sound.  What you will hear on our disc is a very close representation of exactly what you would hear if you played these albums on your turntable at home (if you have one...).  Yes, there are some warts and bumps.  But unless the master recordings of these songs are found someday...or maybe someday someone manages to invent sound processing software with near-miraculous capabilities...this is the best we can do.

One thing we did focus on, however, was fixing the problems with pitch in the original recordings.  This was a tricky and imperfect process, but especially on the song "I'm a Soldier in Christ's Army," you will be pleasantly surprised to hear how crisp our earlier recording sounds...with none of the horrible garbling at the end!

Above all, the addition of these two extra songs, which have sat unknown and unheard on a little 45RPM album since 1965, is a great bonus.  I guarantee you will be charmed by the Marchese Family singing "Christmas is Christ's Birthday" and "I Want To Be a Little Missionary."

And because we want to encourage you to try both our album and the sheet music, we will be offering a special discount when you order both!